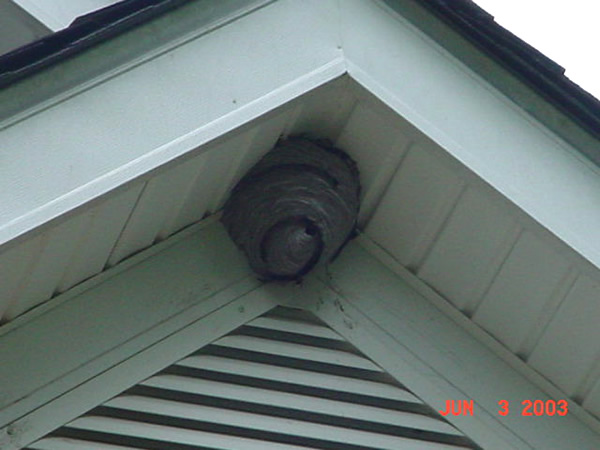 Hornets nest on a house in Alpharetta

Hornets are without a doubt the tough guys of the stinging insect world. They will readily sting anyone or anything that they believe to be a threat to their nest. They attack in great numbers, their stings are very painful, and they can sometimes cause reactions even in people who aren't usually sensitive to stings.

To make matters worse, hornets are unpredictable in addition to being ornery. It's hard to guess whether or not they'll consider a person a threat. The same person can walk past the same hornets nest every day without the hornets becoming alarmed, and then one day they'll decide to attack.

Part of the reason for hornets' unpredictability is their watch-standing system. At all times, a few hornets will be standing guard outside the entry hole to the nest. These hornets are known as "sentries." When they see something that they don't like, the sentries alert the rest of the colony, and massive numbers of wasps immediately emerge and attack the object of the sentries' suspicion. So it's quite possible that the unpredictability of hornets is simply a function of which sentries happen to be on duty at a given moment in time.

Whatever the reason, hornet control definitely is not a do-it-yourself job. There are over-the-counter "wasp-freeze" products, but they basically give you one chance to get it right. If your aim is off, you'll just annoy the hornets; and annoying hornets is something you really don't want to do.

Hornets nest in a tree in Dallas, Georgia

The two species of hornets most common in Georgia, Alabama, and South Carolina are the bald-faced hornet and the European hornet. Both are very aggressive and inflict extremely painful stings that can hurt for several days and usually cause localized swelling.

Bald-faced hornets are among the most aggressive of all stinging insects. They are predominantly black in color with white or pale yellow markings. They live in nests made of paper that they make themselves from chewed-up wood and their own salivary secretions, and which are usually built in visible areas. At the center of the nest is a comb-type structure in which eggs are laid and young hornets raised. Like all hornets, they do not make honey.

European hornets are strikingly-colored wasps with yellow and black abdomens, thoraxes of reddish-brown and black, and yellow markings on their heads and mandibles. They are only slightly less aggressive than bald-faced hornets and they will sting in large numbers if they feel threatened. They also build paper nests, but usually they build them in protected areas like hollow trees, soffits, and other void areas.

Unlike bees, hornets are not considered beneficial insects and usually are controlled using insecticides, followed by nest removal. Usually this can be done in one trip, but once in a while it may be necessary to kill the hornets in one trip and remove the nest on a second trip.

Because of the hornets' extreme aggression, customers should stay well away from the nest while our technicians are treating the problem. Our technicians are equipped with wasp suits to prevent them from being stung, but hornets will often attack anyone in site when their nests are attacked; so for your own safety, please observe whatever instructions our technician provides.

We provide hornet control throughout Metro Atlanta and the surrounding communities in Georgia and Alabama. Please contact us for a no-obligation consultation or to schedule an appointment.