Other Stinging Wasps and Bees 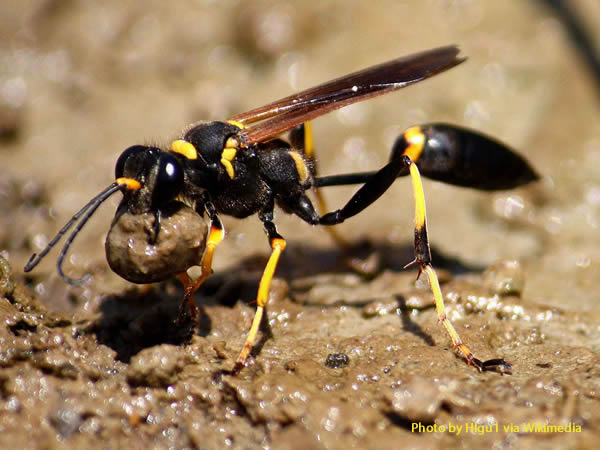 Mud daubers get their name from their habit of building nests of "mud," which they mix into a mortar-like substance and attach to vertical surfaces. Their nests can commonly be found on the sides of buildings and on window and door frames. The insects are usually dark blue or black in color. Some species have yellow markings.

Mud daubers as a group are not especially aggressive, rarely stinging unless they are directly threatened. They're disliked mainly because their nests are unsightly and sometimes difficult to remove, especially if they've been there for a while.

Mud daubers have also been implicated in at least two plane crashes caused by inaccurate readings resulting from mud daubers having built nests in the aircrafts' pitot tubes. 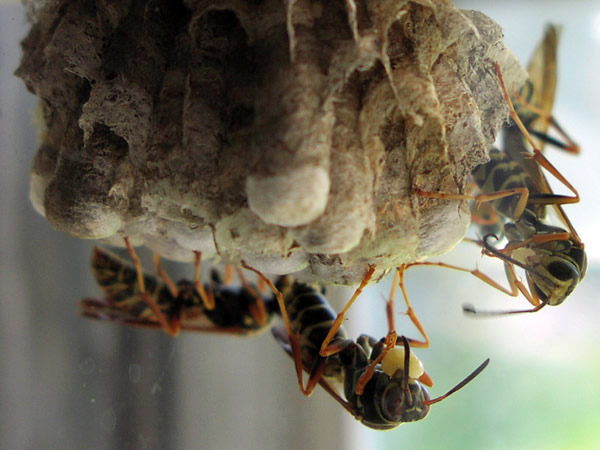 As with mud daubers, "paper wasps" refers to a large group of wasp species that share the characteristic of building open, exposed, paper nests. These nests are usually found on the outside of buildings (especially hanging from porch ceilings or attached to window and door frames), or attached to plants, trees, or other natural objects.

Paper wasps vary in their aggressiveness, but most are not very aggressive. In fact, most of the the time they barely seem to notice people who walk by their nests. But most species are capable of inflicting painful stings if they feel threatened, so don't go doing anything that's likely to annoy or scare them. If you're allergic to insect things, you probably should give us a call to have them treated. We can treat the other window and door frames while we're there to discourage other wasps from building nests.

Other than if you're allergic to stings, it's really up to you whether you think it's worth exterminating paper wasps. They do no damage to buildings and rarely sting. 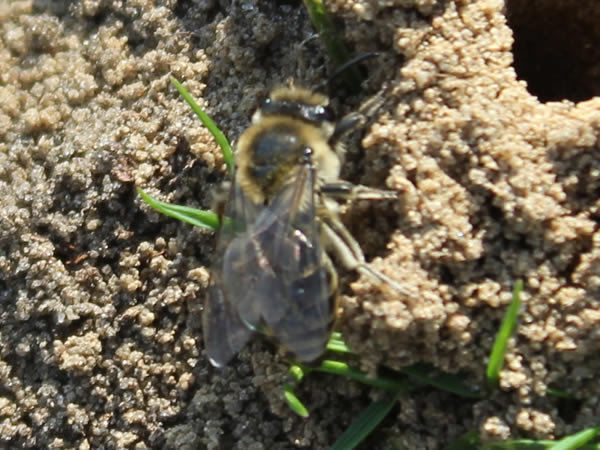 Digger bee outside its nest

The term "digger bees" also refers to a large group of ground-nesting, solitary bees, but most of the ones we come across in Georgia belong to genus Anthophora. Other common names for these bees include "dirt bees" and "mining bees." They're also incorrectly called "digger wasps" by some people.

The main problem with digger bees is that they dig up lawns. Aside from that, they're actually overwhelmingly beneficial insects. They're a non-aggressive species of bee that rarely stings and they're excellent pollinators. With honeybees in distress throughout our region, the relatively strong population of digger bees are helping to carry out pollination of our crops.

Whenever possible, digger bees really should be left alone, and treatment limited to those locations where it's really necessary. But if they get out of hand, please give us a call. 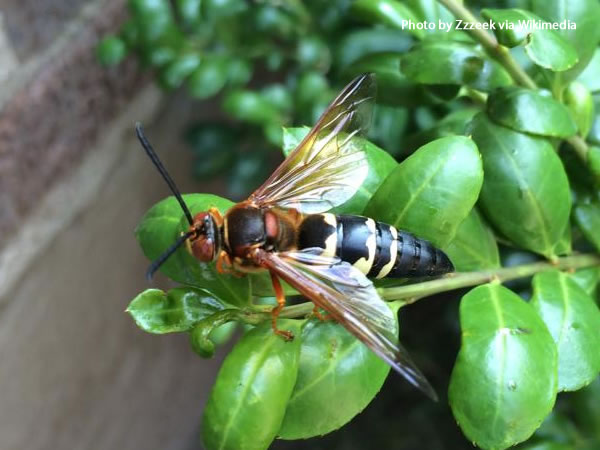 Cicada killer on a plant in a front yard

As their name implies, cicada killers are predators of cicadas. They don't actually eat them: they paralyze them and lay their eggs on the cicadas' bodies. Then when the eggs hatch a day or two later, the young feed on the paralyzed cicadas. (As we often say around here: Nature's always beautiful, but it's not always pretty.)

Cicada killers look like very large yellow jackets. They fly very aggressively, often terrifying people by their seemingly aggressive flight. But the males have no stingers and the females rarely sting humans. They're disliked mainly because of the damage they do to lawns.

Unlike bees, cicada killers are not significant pollinators. But neither do they do any real harm except to lawns. Whether or not you want to treat them is a personal decision. Some people are more bothered by them than others. Be aware, however, that untreated cicada populations can become immense over the course of several years, so you may want to nip the problem in the bud.

If you're having problems with these or any other stinging insects, please contact us. We provide stinging insect control throughout Metro Atlanta and the surrounding communities in Georgia, Alabama, and South Carolina.