Dead yellow jackets in an attic in Atlanta

Yellow jackets build paper nests that can become quite large. They usually build them in protected places like wall voids, soffits, attics, abandoned cars, unused sheds, chimneys, and hollow trees. The nests are usually round or oblong if they are in a relatively open space, but they conform to the shape of the available space when they're in smaller spaces like wall voids.

One of the things that makes yellow jacket treatment difficult is that the nest may be located quite a distance from the entrance holes to the voids. This complicates treatment because if the nest itself isn't treated, the yellow jackets can usually find another way to get to and from the nest, bypassing the insecticide. In some cases, an improperly-done treatment can actually force the wasps deeper into the home into areas occupied by people.

We always attempt to precisely locate yellow jacket nests so they can be treated directly. In addition to making the job faster, easier, and more effective, these tools help us avoid drilling unnecessary holes in your home and minimize the risk of yellow jackets entering your homes living areas. 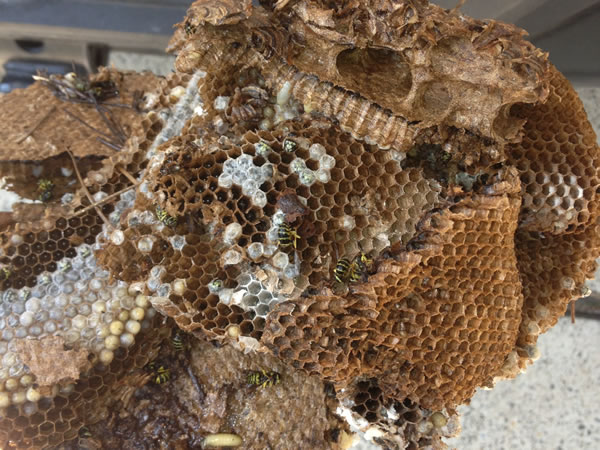 Yellow jackets are omnivorous foragers and are common pests at picnics and outdoor cafes. They can also be seen hovering around trash cans looking for scraps and beverages left over by humans. Most of the protein collected by the adults is fed to the young. The adults prefer sweet foods like nectar, fruit juice, and sweetened beverages.

Like hornets, yellow jackets are aggressive and are capable of repeated stings. Although somewhat less aggressive than hornets, they will readily attack any human or animal whom they believe to be threatening their nest or their feeding areas. They also have been known to sting people who are reaching for their food at picnics.

Unlike bees, yellow jackets are not significant pollinators and are usually treated using insecticides. Once we've located the nest, we treat it directly for quick, effective control. Because yellow jackets don't produce honey, there usually in no need to remove the nest once it's been treated.

We provide yellow jacket throughout Metro Atlanta and the surrounding communities in Georgia and Alabama. Please contact us for more information or to schedule an appointment.